I bet you wouldn't be into turtles any more.
I mean, I'm sure we'd still have your friend Speedy living in the house, but you'd have a new interest.
Maybe.

I'm sure that we'd be DEEP in the prep for your Bar Mitzvah today, so deep that I probably might say, "are you sure you want donuts?" and you would look at me and maybe you'd even joke: "mom, I had cancer. You can't go get me some simple donuts on my birthday?" And we'd laugh. Because I'm pretty sure that we would have so much to laugh about.

I'm sure that I would still be worrying about you a lot, but I'm here to tell you that is a parent's job. So I'm pretty sure that I would tell you how I plan to be annoying to you for a long time to come. Because that's what we say in our family.

I'm sure of all of this.

But what I'm surest about is how much we miss you.

To make a donation to St Baldrick's in honor of Sammy's 13th Birthday, go here:
https://www.stbaldricks.org/fundraisers/sam13 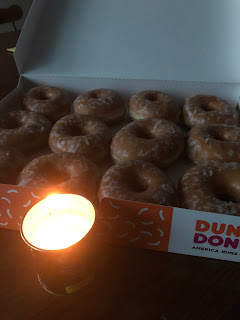 When I wrote my last post, The Invitation That Wasn't Sent, several people told me that they thought it was going to be about Sam's Bar Mitzvah.

I gave it a lot of thought. Why did I focus on that invitation instead of the one that I was even MORE likely to have sent? The Marrow Day party was a little bit of a pipe dream (I mean, come on, Obama AND Rowling AND Miranda?! Pick one, Phyl.)...but the Bar Mitzvah...that was real.

And that's when I realized how very much harder this is.

The Bar Mitzvah was ALWAYS on our minds. We talked about it very early on (here and here). It's a milestone that is fixed, age-based. It's not like a graduation, which takes place alongside a whole group of others, or a wedding, which is individual and not related to a specific age. It's meant to happen at a certain time for a certain person.

And so it's been weighing on me, so so so much.

What would we be doing in these days leading up to the Bar Mitzvah? How many challot would I be baking? How many suit fittings would we need? What kind of tallit would he be wearing? Who from all of the various important parts of his life would have honors? (Would we be inviting SuperMensch?) Which parts would he be playing on the guitar? How would we fit everyone who wants to be there into the sanctuary? Would there be enough tissues in the world....

And yet, I'm doing none of that preparation.

So yesterday, I made him a Bar Mitzvah Montage. It was one of my favorite parts of preparing for David's Bar Mitzvah. I loved looking at all the photos, glorying in his growth and change, and choosing just the right blend of pictures, videos, and music to represent who he was, who he had become, and who we hoped he would be. Doing the same for Sam...felt like a good project.

It was harder than I thought, and I ended up using a compilation of pictures I had put together over the years, rather than looking at all of them. And of course, it has a different ending than David's.

Along with that, I decided that we should go somewhere with the pain of this date. So I turned my thoughts to how we have always dealt with the big Sam-sized hole in our lives, and I've opened a St. Baldrick's Fundraiser in honor of what would have been Sam's Bar Mitzvah. I hope you'll consider the $18 gift that you might have given to him as a donation to St. Baldrick's, in hope that the next child gets to celebrate a Bar Mitzvah....or whatever fixed milestone they believe in.

The Invitation That Wasn't Sent

This is the invitation that I wish I had sent out today. (We might have sent it out in advance, and we might have had to change venues several times because so many people wanted to come and celebrate with Sam and SuperMensch - so eventually we had to move to the United Center, since it got so big. And I'm sure we might have suggested that we could wait until the Bar Mitzvah in November to celebrate, but then we realized that we don't. wait. for. anything. anymore. So we went ahead with this big party.)

You know, we could have skipped the party. After all, it *might* have been an ordinary day, I suppose. Perhaps we wouldn't have even really noticed, except that we would be trying to decide which day of the week to head up to Wisconsin for a checkup. Perhaps it would be a longer checkup, and I'm sure we would stop over to the HOT unit with some gifts, to the Ronald McDonald House with some toys, and we'd have to get frozen yogurt in town too. Perhaps things would have been so "normal" and so "ordinary" that I would have had to remind everyone that this "other" birthday was coming up and perhaps Sam might have said something like, "I have to go to school because I don't want to miss my algebra class." And I might have reminded him that we can't go later in the week because he has Bar Mitzvah tutoring. And so we might have compromised on a different day, and it would have been a joyous homecoming to visit our friends at the hospital. And they would, as usual, marvel at how tall and sturdy he is and how far he's come from the little second grader who terrorized the nurses with water-filled syringes and played soccer in the elevator and added googly eyes everywhere in the hospital and was SO sick.

But none of that happened.
None.

1, 717 days have gone by, and not one day goes by without a mention or thought of Sam in our household. We are all deeply, consciously, constantly aware of his missing piece.

I must be truthful when I tell you that the pain is mostly like a big shiny scar. It's a part of me, and I subconsciously rub my thumb over it...occasionally it will hurt, but mostly I'm just aware of its presence.

We're not throwing a big party. I really would have loved to throw that party.

*I decided that Sam would have loved Minecraft as much as Solly does
**I'm sure Sam would share the family love for Hamilton, right?

If you're looking for a way to honor SuperMensch and remember Sam today, let me suggest a donation to St Baldricks. There are so many kids who still need us. 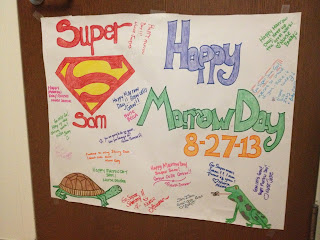