Sam has always been, um, how shall I say it, a bit picky about what he will eat in the hospital.
(He isn't, as a general rule, that picky of an eater outside of Cancerland.)

It wasn't so much that his tastebuds were really affected before, but more that certain foods just appealed to him and others did not. Okay. This I can deal with.

And then I almost fell over. Because he hasn't expressed any interest in food in over 10 days. So I cut up an apple. Then I presented it to him and I photographed the experience, since I was so excited: 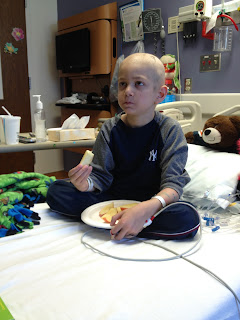 Scrrrrreeeeccch. I came crashing back to earth as that one bite was all he took.
"It doesn't taste right," he said.

I checked. It was perfectly fine.
I'm sad to say that it is Sam's tastebuds that seem to be impacted. (Darn radiation)
Now we have to figure out just what it is that will taste good. He still isn't really hungry, he hasn't expressed interest in eating. I ask all the time. (Did you think I wouldn't?) But Dr. M has also told me (a few times, he knows my Jewish-mother-tendencies toward feeding) that until Sam wants to, we shouldn't force the issue. He says that Sam's body will know when it's ready. Since he's usually right about these kind of things, I'm going to have to trust him. (Oh, and P.S. I ate the apple.) 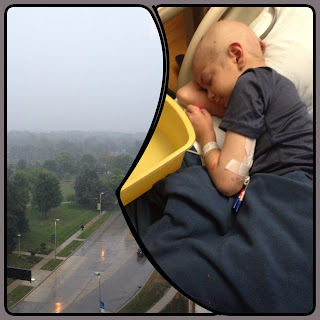 Okay, he probably slept all day because he was running a fever from Friday night through most of Saturday....we're hopeful that it is not a sign of infection, but rather an early sign of engraftment. What does that mean? Engraftment is the magical process of the donor cells finding their way into the empty spaces in Sam's marrow and moving themselves in. (Remember how I said they were picking out paint colors? Some cells like fancy paint styles which take longer to procure, and some prefer to have the hardwood floors refinished, which takes longer than simple paint and carpet. We don't mind if the cells are particular, hopefully it means that they're just forward-thinking never-want-to-remodel-again type cells. Or maybe they got a good contractor and things are moving along quickly?!) Anyway, this can take a while, and frankly, I'm not sure that the doctors even know exactly how the cells find their way to the right spots. The first sign of engraftment is a very gradual and tiny rise in White Blood Cell (WBC) counts.

Until yesterday his WBC counts were >.1 -- that little "less than" symbol was super important yesterday....BY ITS ABSENCE. Yes, he had a WBC of .1 on Friday, and it was .1 again this morning. But a repeat blood test this afternoon indicated .2!

So small.
Tiny, really.
So fragile and delicate.
And so fraught with potential danger.

But it's there. It's something.
It's a move forward.

Now, it's totally possible that these numbers could bounce around a lot. They look for trends, for something they can really hang their doctor coats on. But I'm good today with just this tiny bit.

Once his fever broke on Saturday afternoon, Sam was pretty chipper and he took a bath, watched some television, and even took a walk (9 laps!) around the floor.
Not bad for a kid with a WBC of .2, right!? 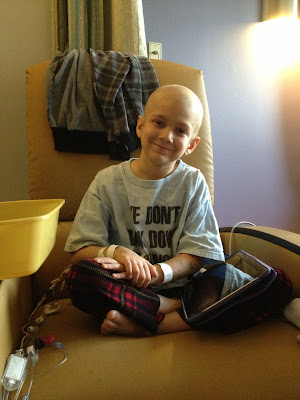 Posted by Phyllis Sommer at 8:36 PM