We had an amazing day. I brought Sam's five year old sister, Yael, up with me to see Sam and spend the night at Bubbie and Zayde's house. They hung out for a bit playing with Hexbugs as Phyllis gave me the rundown on all the details of isolation and patient/personal care while isolation is in effect for the whole floor. When she told me we'd probably be in isolation for the duration of Sam's round of chemo it took everything not to run screaming from the room in frustration. Not for me, but for Sam who so far is having an incredible stay in the hospital. His spirits soaring day in and out, I'd hate to see this jeopardize that. On top of that this might be the last good week for a while as his numbers begin to plummet in response to the chemo before they start going up again.

So at lunch time everyone left us and I showed Sam all the goodies I brought up with me. He loved the new games, Marvel vs Capcom and the "above his pay grade" Batman: Arkham City. We played around with this for a while, but the most enjoyment came from making Star Wars paper airplanes all day and flying them. 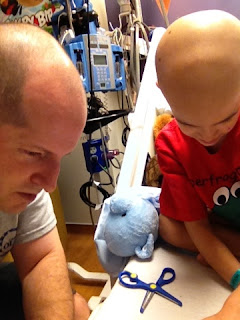 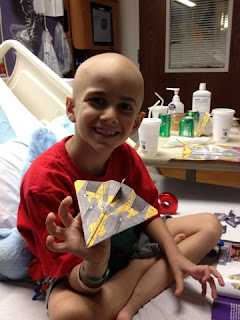 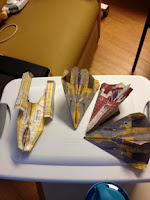 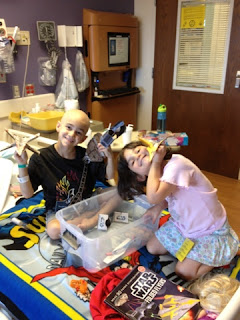 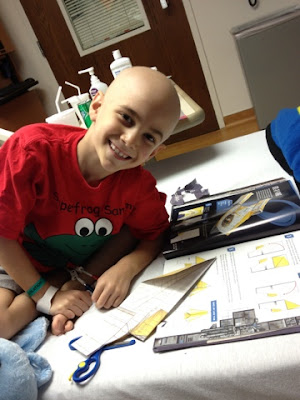 Sam LOVED making the airplanes. He loved choosing which ship to make, folding them, cutting off the appropriate sections, taping them and finally flying them. The images and challenge drove him on all day. I swear we made seven or eight planes in addition to the ones he'd made with his mom earlier. It was an incredible two-person project that we both enjoyed doing together.

Sam watched some Phineas and Ferb on his much beloved iPad and requested the old Pink Panther cartoons in the late afternoon (I didn't know that Phyllis' great uncle, Abe Aaron, played the lead sax on that famous Pink Panther theme song. You learn something new everyday).

The nurses and staff were amazing. Sam was in good form all day even if he didn't feel like eating that much. He munched on Cheerios all day and that was about what I could get him to consume. He perked up for dinner when I mentioned hot cocoa and then I promptly forgot to order it. No biggie since I knew it was stocked in our floor kitchen, so I jetted out and made him a cup which he quickly told me was too hot (they call it HOT cocoa for a reason! Otherwise it would have been called chocolate milk!). I added cold milk two or three times and he seemed thrilled with his formerly hot now quite tepid cocoa. Whatever makes him happy.

When Nurse E came on for the nightshift I thought Sam was going to put on dress clothing and dab on some cologne. I mean he nearly kicked and karate-chopped her several times he was trying to be so playful and was so glad to see her. He was flippant and petulant all in his six-year-old "Oh my God, I love you and am so glad to see you, but have no words to describe love for someone other than my immediate family."

After dinner and pajamas we turned on the Olympics and watched together. When he started feeling nauseous I read to him from his new graphic novel, Path of the Assassin, until his meds arrived. Then I sang the Shema, kissed him goodnight and prayed he'd find some much needed rest.

Thank you all for all your prayers, love and gifts. They make all of this bearable and give us much needed strength and joy.
Posted by Unknown at 10:07 PM