When we last left our hero, he had requested macaroni and cheese.
Made by his mama.
Outcome? Success! 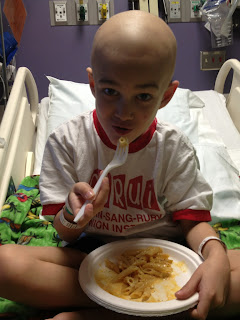 There are many ways to get a kid to move around. He's not the most meditative child, he prefers to move quickly and with flair. But I've gotten him to do a little bit of yoga with me a couple of times. Today, however, he had a little audience (Bubbie and Zeyde and Karen) and so he hammed it up. I love that he has the energy and spark to ham it up. 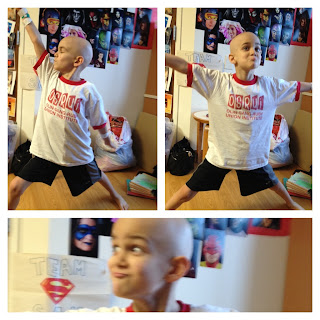 There are some interesting things that happen in a children's hospital. They try so hard to come up with ways to bring the fun and games to the kids. So they brought the Wisconsin State Fair here! Even though Sam is still in isolation, I was able to go downstairs and check it out. I took a few videos so that Sam could see what was going on...there were jugglers and musicians, games and prizes. And, of course, FOOD. There were corn dogs and popcorn and....cream puffs. I love the State Fair, I've always loved it. Sam has never been, of course, and he was reluctant to try the sweet treats. He was not impressed. It was a sweet and wonderful reminder of the real world. Next year? We're all going to the Fair. And to camp. And to the pool. And to the beach and to Green Lake and Green Bay and Summerfest and everywhere. And the silver lining is that we will enjoy them even more after a summer spent in the hospital, right?
One of Karen's specialties is bringing great books for Sam. He loves the Elephant and Piggie series and the Scaredy Squirrel - so today she brought a stack of both! (from the library, of course!) We all laughed out loud at these fun and silly books. But no one enjoyed himself more than Zeyde, who is now a big fan of both sets!
The wonderful Tatelli family, after much family discussion, decided that Sam could spend some of his isolation time learning magic...and they sent him a wonderful magic kit! He spent quite a bit of time today practicing his technique.
A video will be coming soon with his "performance"....

Sam is tired easily. It was interesting to see how quickly he went from interested in each activity to resting. In contrast to the first round of chemo, though, he didn't hesitate to tell me he needed a little rest, and he took frequent lay-in-his-bed-breaks that were mostly timed by how many episodes of Pink Panther he would watch. (Everything is a negotiation....today he watched 7.) I can't explain just how impressed and proud I am of the way that he is handling the isolation, the oral meds, the discomfort...all of it. My little trooper. He IS my silver lining.

- still have C.Diff. It is responding well to treatment but not gone yet. Thank you to so many people who have made suggestions. This is a really common problem in leukemia patients, so they tell me, and although it is a hospital "superbug" I think that it has been a regular problem in leukemia treatment for quite some time...we just have to get through it. It just takes time to heal....

Silver lining: Sam has become a champion at taking meds by mouth. This has been a huge hurdle for him since we got to the hospital and someone told him that once he had a central line, he wouldn't have to take anything orally. Oops. Lesson learned. Sam remembers e.v.e.r.y.t.h.i.n.g. I'm so impressed each time he just swallows down the medicine without much of a peep. Whew!

- Sam's ANC today was about a 6. As far as I know, it will continue all the way down to zero, and then we build it back up. I wish there was a magic build-up tonic that he could take, but there isn't.

Silver lining: Things are doing exactly what they have to do.