My friend Sara Yagobian Goldsen keeps me hilariously entertained with her pretty regular emails and Facebook comments. It brings me back to the days when we used to write notes back and forth in a notebook in our NFTY days....Anyway, she sent me this guest post, which I know will make you all giggle just as much as I did. In lieu of a "real" post about Sam today, I offer this bit of humor about Sam's monkey, George, who sits in his chair at school while he's in the hospital. Thanks, Sara! You rock (and you seem to have a future in comedy writing...) 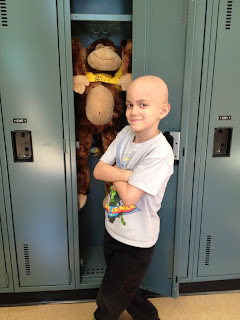 Hello, monkey.  Thanks for joining me for a few minutes to answer some questions about your experiences and your purpose.
Thanks, it's great to be here.  Well, not entirely, but we'll discuss that more later.

Would you like a seat?
Thanks, but I'll just swing from this tree.  It's 'monkey in the CHAIR'…..trust me, I do plenty of sitting!

Suit yourself. I understand you endured the washing machine.  Can you you describe it?
It was a very scary procedure, and I don't really understand why it had to happen.  I don't really want to talk about it.  The washing machine is a controversial torture tactic, and since my mouth was sewn shut I don't know what they ever expected to get out of me.  The Washing Machine makes headlines, but I also endured The dryer.  It is seemingly endless tumbling.  I felt like I was going to puke the entire time.  And I had a massive headache (a common side effect of this procedure).  I've shared a lot, but frankly, I'm entitled to some medical, as well as some emotional, privacy.  Please respect that.
Sorry.  Moving on.  Can you tell me why you were manufactured?
Well, sometimes kids get sick, and not sick like need to stay home a day or two and nurse a sore throat or a stomach bug.  They get sick and need to be in and out of school, sometimes for long periods of time.  They may need to have treatment outside their home in the hospital for days, weeks, sometimes even months at a time.

So you go to the hospital?
Not exactly.  A lot of hospitals is where kids first meet a monkey like me.  But since a sick kid has to be in the hospital so much, and since they may not feel like going to school even when they are at home and not the hospital, I go to school for them, and sit in their chair.

Sitting in a chair doesn't sound so difficult.
It's harder than you think.  First of all, I represent a sick child, which always weighs heavily on me.  Second, kids aren't used to seeing a monkey at school.  A big part of why I come to school is to represent the sick child, but people don't always understand.  I worry they won't accept me as a part of their class.  And I keep growing fur….it's just part of my condition….and I worry that they might make fun of me.

Is the classwork difficult?
Actually, all the classwork gets passed on to the kid.  You never stop learning, no matter how old you are.  There's a teacher at the hospital, and the classroom teacher has visited Sam up in Wisconsin, not just for classwork, but to show support as well.  Readin', 'Riting, 'Rithmatic, and 'Rsitting were all prerequisites to being accepted into the Monkey In My Chair program, so I could do it, but that's not really my job.  My job is to represent Sam, be part of the class for him when he can't be, be a connection for Sam to the class, and educate kids who may not understand why Sam has to be gone or what he's going through.
I understand they offer Spanish at this school.
Si.
When people ask about you does it bother you?
I feel the love, but there are times I wish I had a little more privacy (clothes, anyone?  Seriously…….)  People love and pray and are worried, but the Sommers have so much on their plates.  I know they mean well, and I'm happy to play the role I do.  Thankfully they know everyone understands if they don't get an answer right away.
Why aren't you bald, and does it bother you to have so much fur?
Not really.  I've got fur.  On my head, on my feet, everywhere. Having so much fur everywhere-and I mean fur EVERYWHERE-is just what's expected during treatment.  Lots of others have fur, too.  It's one of the things I was worried about when I first started going to school, but everyone has adjusted well.  Not to worry, it can always be shaved back off!
How did you feel when Sam was in remission?

I was ecstatic!  Sure, I knew I was going to miss the love and good vibes of everyone at school, but it was time for Superman Sam to just be Sam and go to school and sit in his own chair.  Ultimately my purpose is to educate others about a child's illness, and help the child who is in treatment feel like they're still part of what's going on at home and at school.

Please describe those 5 months.
After the initial hoopla wore down, it actually got kinda lonely.  I didn't go to school.  And I don't want to 'kvetch' (living with two Rabbis has been a learning experience), but everyone has been so focused on Sam, his parents, his siblings, and even the new turtle that I haven't always been given the love and attention I need.  Actually, my biggest complaint has to do with frankly some abuse I've endured.  Handing me over to the littlest Sommer* kept the creature busy and out of the hair (even the father who doesn't have any!) of the bigger humans.  But as much as I've been kissed, I've also been drooled on and munched.  Further, as I am told is typical of these 'higher level primates', this one is a toddler, and prone to outbursts, verbal and physical.  He screeches when he doesn't get what he wants.  And when the zookeepers weren't looking, I was thrown during what I understand is termed a 'tantrum'.  But to be totally honest with you, deep down I was happy that Sam was happy and able to go to school himself, so I didn't really mind.
How did you feel when Sam began to have pains again?  When you got confirmation he had relapsed?
Really scared.  And not just because I might literally be 'the monkey in the middle' of a tug of war between a toddler and an adult sending me off to school, but because of what I knew that might mean for Sam and his family.   And to be entirely honest with you, I was angry.  Angry that I wasn't able to fix this, and that cancer and other illnesses strike kids to begin with.  I wish there was no need for me.  Ever.  For any family.  Frankly I'd been enjoying the benign neglect under the bed and at the back of the closet.  Seeing the light of day isn't always a good thing.  The humans talk a good game, but I see their worry.  I see their pain.  They talk a good game.  I know they are surrounded by family, friends, loved ones and wonderful medical staff.  But ultimately there's only so much I, or anyone, can do.  I hope that being here helps them in some way.
What do you do with your days and nights now?
Check out the pics online.  None of these 'adults' seem brave enough to confront the toddler over custody of me.  But school is still sending thoughts and prayers to Sam and family, so I guess the purpose for which I was created has been filled.
Anything else you want to share?
Yes, I'm feeling a little nauseous.  Please hang a banana bag!
*This part made me laugh so hard that I didn't have the heart to take it out but I have to clarify that Solly does, in fact, have his own monkey. George stayed at school through the whole five month period, albeit way up high on a shelf. We were thinking that he could stay at school for another kid who someday might need his services. We didn't imagine that Sammy would need him again. Sigh.
Posted by Phyllis Sommer at 7:00 PM