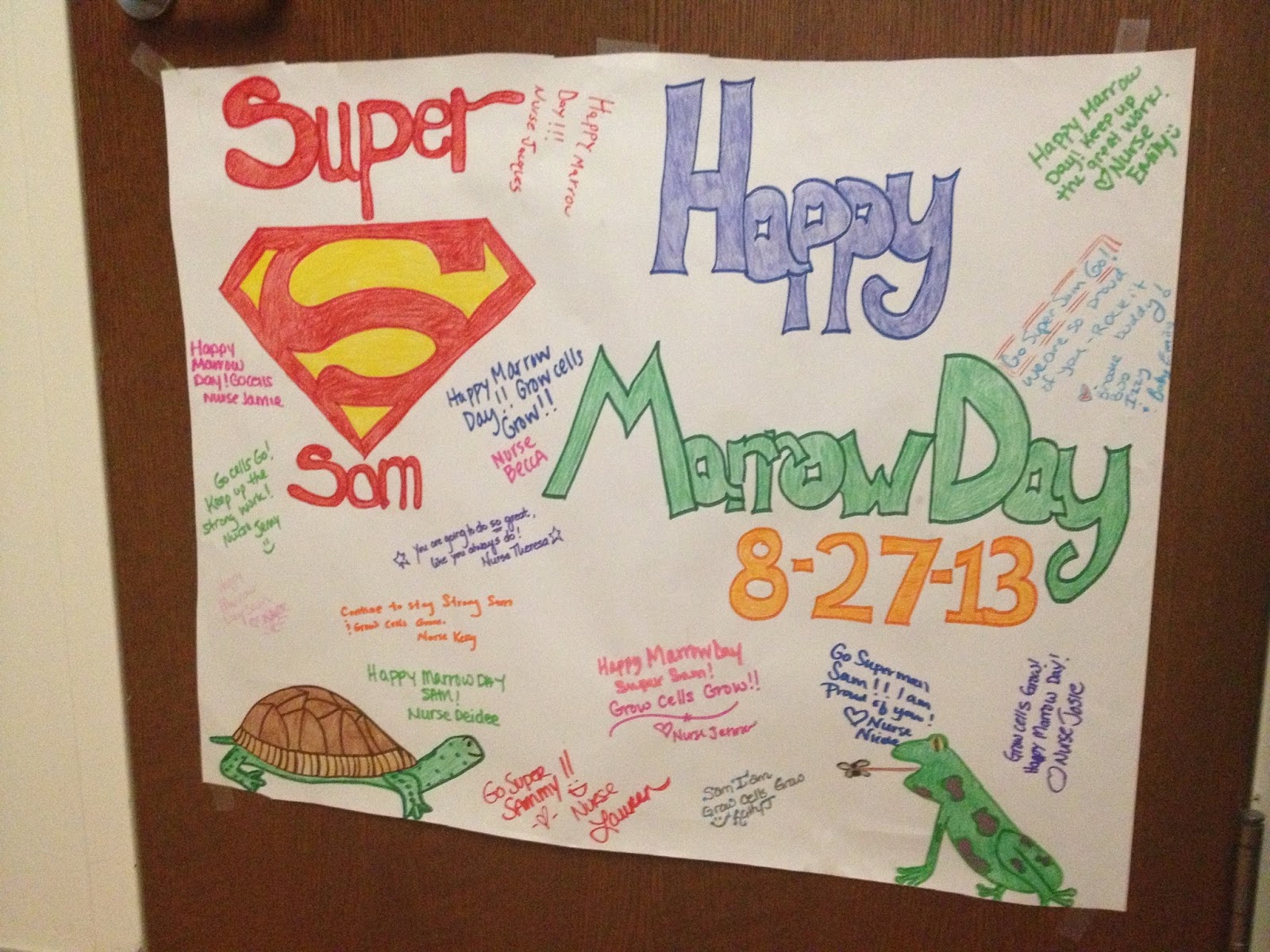 He was really proud of the idea of having two special birthdays.

I had imagined a big celebration for this week, heading into his first bone-marrow-birthday. A big bash. A pool party? A carnival? A bone marrow drive? A fundraiser? Sam and I had even discussed the options, the ideas. He was beyond excited for two birthday parties!

Instead of a bone marrow birthday celebration (and don't worry, someday we might actually have that fundraiser carnival on his birthday), we had a different experience.

It was a small, family affair.
There were many many tears.
And a few giggles, mostly related to the questions that Solly asked ("Are we going to dig Sammy up, mommy?") or the funny stories that we all told about him (Yael loves to laugh about their card games together).
Did I mention that we cried?

We left pretty rocks that we rescued from the beach and painted. Our sweet young friends-like-family painted turtles.

Of course, there were googly eyes.
It's all very real. It never fails to be real.
But that headstone, so very real.
So very final. 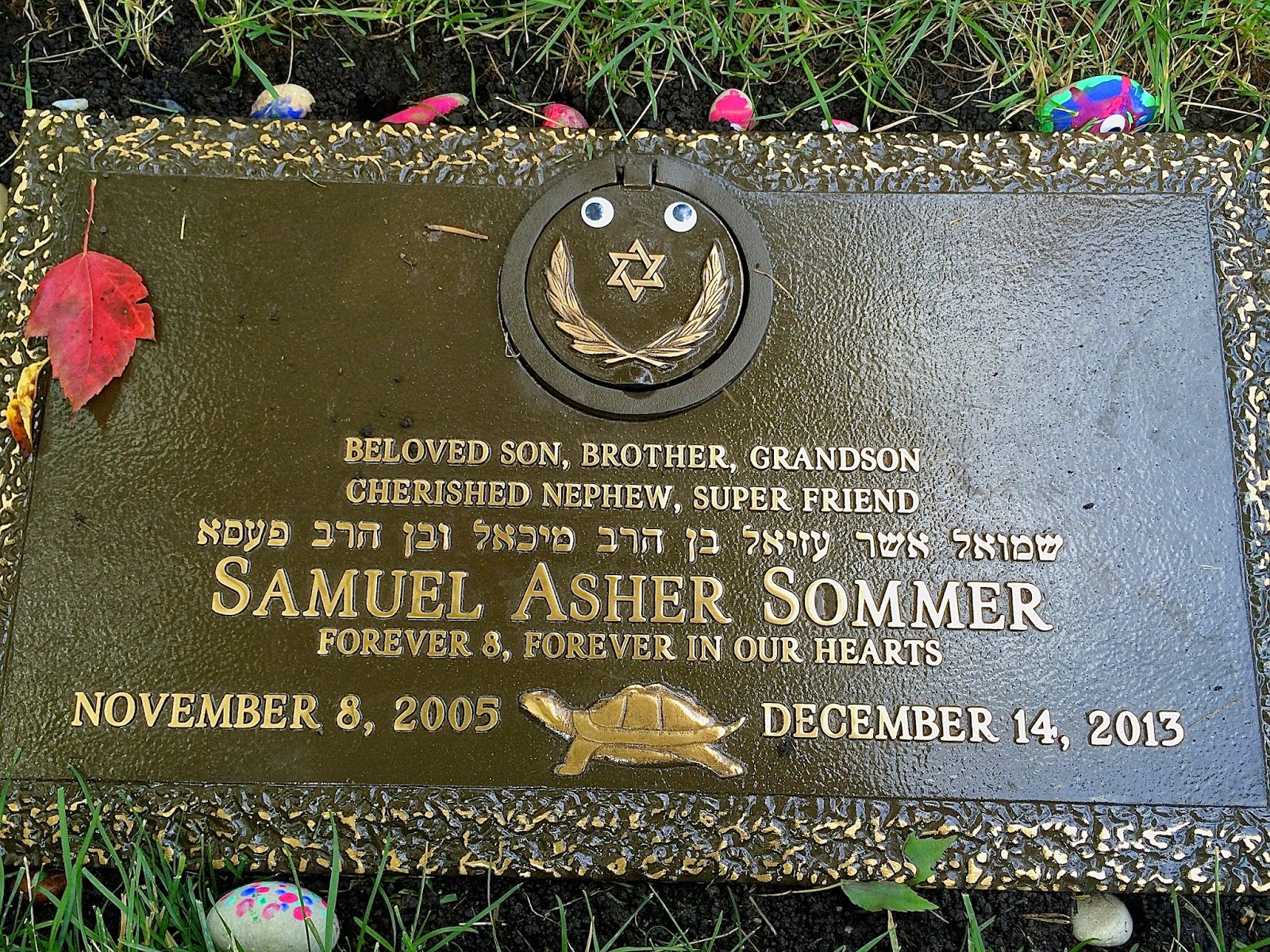 That doesn't make it any easier.
Just....missing him.

Today is 256 days that he's been gone, and exactly 365 days since bone marrow transplant.
Where we were:
One year ago today: a bone marrow birthday
Two years ago today: a short hospital stay 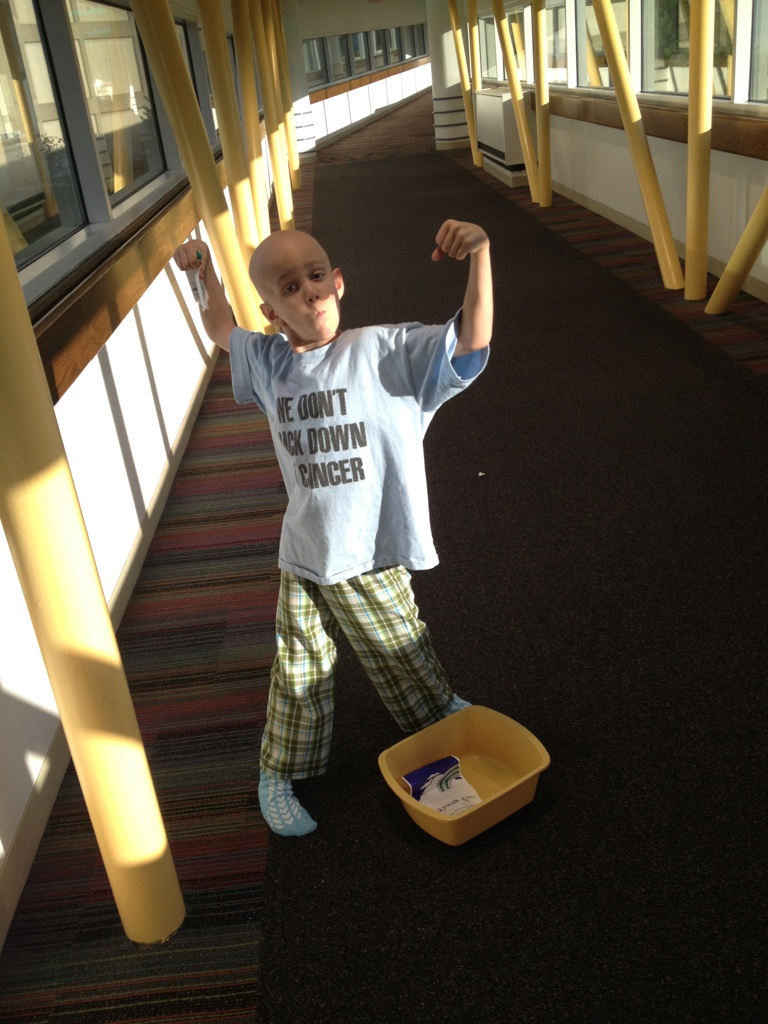 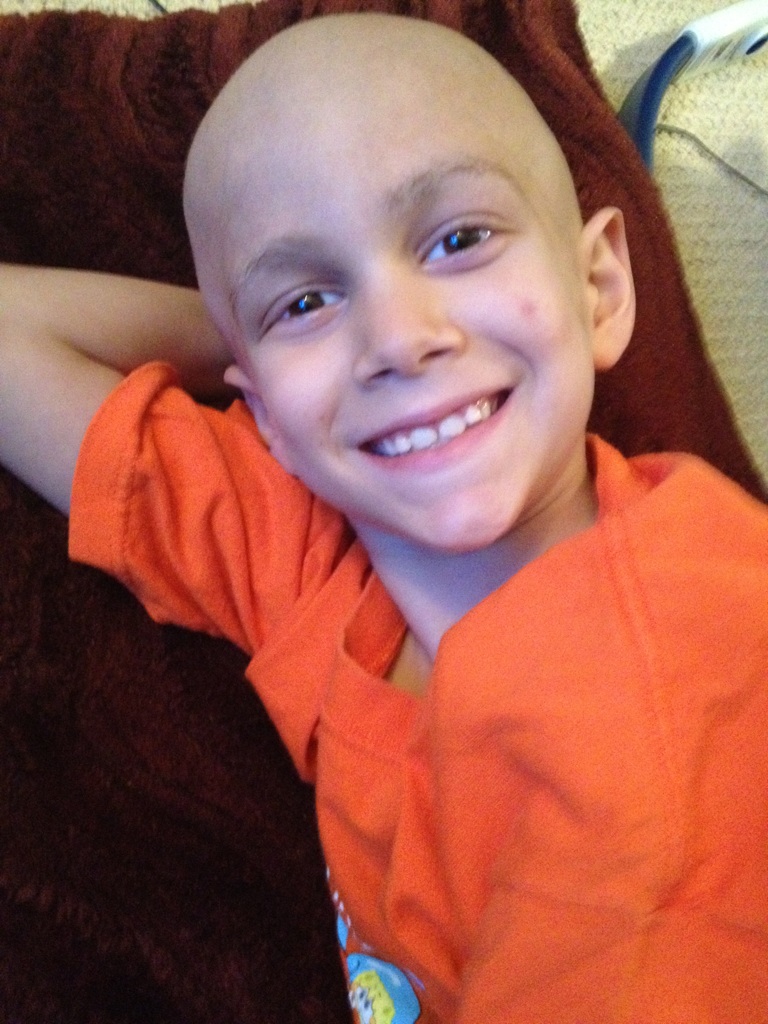 *Jewish tradition has a lot of customs surrounding death and mourning. The custom of setting up a stone or a monument, dates back to the Torah, in which Jacob erected a monument to his beloved Rachel after her death. Obviously, the marker helps to identify the grave and to honor the dead.
Posted by Phyllis Sommer at 12:01 AM 7 comments:

You might not believe this about me, but I'm actually not that sentimental about many physical objects.
In particular, I don't have bags and bags of my kids' artwork or schoolwork.
I look at it, and I ooh and aah. I will often take pictures of the artwork to save "for posterity."
I learned early on that with a whole bunch of kids and a small house....I could easily be overrun!

So I strung up some clothesline in my kitchen and basement stairwell. A few clothespins, and voila, an art gallery. I try to cull it down, especially at the beginning of a new school year, to make room for new art. I record the pieces with pictures, and ask the kids if they want to keep any of them. They usually say no.

Over the years, I can't imagine how many of Sam's pieces of artwork I have thrown out.
Would I have done so if I had known? Would I have saved every scrap?

There's quite a bit of Sammy's artwork still hanging up. Kindergarten work, and some of his later art from the hospital.

You often read about famous writers or composers who leave behind an unfinished novel that's published as a short story, or a symphony that's found in a drawer and presented in a memorial concert. We're not going to find that. He was eight years old. Very little happened that we didn't know about (no secret novels or diaries for this little guy). After he died, I flipped through seemingly-blank notebooks, hoping that maybe I'd find one more pencil doodle on a random page at the back. But for the most part, what I have is what I have.

I took down nearly all of the artwork from the other kids from the past year. But I left Sam's. I'm probably going to eventually frame some of it, to protect and keep it safe.

I'm so immensely sad that I won't ever have any more of it.

So much beautiful art that will never be made.
The art of living....
It's been 250 days since his last breath.
A year ago today Sam was prepping for BMT
Two years ago today, Sam was striking a pose. (Also this week, two years ago, he started first grade.)
Posted by Phyllis Sommer at 12:00 AM 4 comments:

The class lists came out.

Visiting the rooms that Sam inhabited. Seeing the teachers.

His classmates, grown taller and sturdier over the summer. Their sweet tanned faces filled with the anticipation and expectation of a new year.

And Sam's not there.

We're all moving forward into the newness of the new.

And he's frozen forever...with us but not with us. There but not there.

New teachers who didn't know him.
New people to meet who never knew that my children once had one more living brother.
New faces to explore and see the recognition in their eyes when they realize who we are.

Third grade.
He was supposed to be starting third grade this year.

Time rolls on, without him.
Time rolls on, and we roll along with it, acknowledging milestones, moving forward, continuing to live our lives.

This week began a huge series of historical milestones in Sam's life. A year ago, we had an epic trip to Disney and shortly afterwards began the BMT process. Each day, I was completely and totally aware of the date and the number of that day. I watched as my other kids started school. The high holy days were just around the corner. Each moment was a progression, an event, an experience. Each moment was documented and recorded, because that's how we do things. His BMT "birthday" is coming up, and I really had imagined a huge blow-out pool-party-carnival-extravaganza to celebrate.

But that's not what we have.
And so I try to hold back the tears, and sometimes they fall anyway.

So many kids came home this week from their time at summer camps all over the country.

"My house is full again," someone told me.
"We're all back together again," another one said.
"Family complete," said a third.

David and Yael returned to the nest after their time at camp.
I was so glad to see them.

And yet it felt so incomplete. My nest will never feel complete again. In some ways, having them out of the house in various waves made it easier to feel the conspicuous absence of Sam. Always there.

We settled down to our table set for five.

Thinking about starting school and filling out forms -- one whole set left undone.

There was an article published this week about a blessing for "completing" one's family.

Perhaps I'm just superstitious, but I never wanted to close the door on that. Sure, I knew that I was probably done having babies. But I never felt that the word "complete" was the right one for how my family felt. It was good, it was wonderful, but I couldn't close the door on welcoming someone, anyone, into our family. In a sense, we were always incomplete, always ready to open our doors to someone else...biological or not.

But this article gave me pause. Because without realizing it, I had considered us a "complete unit."
And now we're not.

We're incomplete.
Forever.
Where we were a year ago: welcoming David "home" from camp to RonMac
Where we were 2 years ago: having "fun" in the hospital

We dropped Yael off at camp for a short session, her first.
I couldn't help but think that if Sam were here, he would be annoyed that Yael is at camp while he is at home. Even if I reminded him that HE got to go earlier in summer, he would still be annoyed. "I still think I should get extra camp because I missed out on the other summers."

This got me thinking about other things that Sammy would find irritating:

Sam would be sending lengthy missives and artwork and packages to David at camp and receiving scribbly letters or postcards or nothing at all in return. He would find this immensely bothersome. "Why isn't he writing more letters?"

Yael's current pastime is to put on "shows" in which she uses a toy microphone to sing made-up songs. This would probably have made Sam crazy. I can hear him: "that's not really a song!"

Solly's constantly chattering about Transformers. Sam would have either found this irritating or maybe, just maybe, this one would be something that they shared and Sam would be in love.

I wish he was here to be annoyed and bothered and irritated and crazy.

I wish he was here.

Orphan. Widow. These are names that define us by those we love who have died.
There's no name for a brother or sister whose brother has died.

Where we were a year ago...it wasn't good news.

On November 12th, we got a new minivan.

Michael went to get the new car while I took Sam to the hospital for what we thought was a routine biopsy. Until it wasn't. It was a pretty awful day and we probably wouldn't have done the car thing that day if we'd realized what was going to happen.

The old minivan had a little series of people on the back. Before they were on every car around town, I thought the idea was adorable. I waited until Yael was born and special-ordered our then-family-of-five in stick figures. When Solly was born, four years later, I added on one more little person.

The old minivan had our family of six permanently stuck to the back of the car.

I think often about that old minivan. How grateful I am that I don't have to see those little stick people any more, knowing that they would probably be a painful reminder. And yet I miss them terribly. I miss all that they represent.

I'm so reluctant to number things or name things now. When we're counting out plates for dinner or chairs for the table..."so there's five of us tonight," I might say. I'm not in denial. But I still can't quite believe that it's permanent...forever.

There are two stepstools in our bathroom. One of them spent a lot of time at the hospital. From the beginning, Sammy wasn't tall enough to reach the sink or comfortably sit on the toilet. So we brought a stepstool from home. After the first round of hospitalization, we forgot it at the hospital. They kindly wrote his name on it in big letters (with a smiley face) and saved it for us for our next admission.

His name is still on the stepstool.

Solly calls it the Sammy stool. The sharpie is fading away, after repeated bleach-wipings and regular use. But his name is still on the stepstool.
His clothes are still in the dresser.
His artwork is still clipped to the display-line in the kitchen.
His presence is all around us.
I wish it helped me miss him less.