He's always on my mind, of course, in that way that all of my children are on my mind. Even if they're not with me, I have a pretty good sense of where they are all the time. (I'm fully aware this is starting to change with the teenage-stage, but that's probably for a different blog entirely.)

And Sam comes up ever-so-casually in conversation, most of the time.

Solly used to talk about him at bedtime nearly every night. "I miss Sammy," he would say in a plaintive tone.

He hasn't done that lately.
But last night, out of the blue, he said:


I really miss Sammy and I want him to appear back.
We need some magic.

Chase has some magic but he used it all up.
I'm going to ask him to get some more from his mom and we can use it to make Sammy appear back.

I sent Chase's mom a message, a transcript of this conversation.
I told her, "Apparently, Solly thinks you are very powerful."

And what she told me was a little bit surprising to me.
Remember, we're talking about four-year-olds here.

She said that her son, one of Solly's besties, talks about Sammy all the time. And when she questions Chase about it, reminding him that he never even met Sammy, he replies,

"but he's Solly's brother and I love him."

I have no idea how much Solly talks about Sam when he's at preschool. But it's clearly enough that his friend also knows and loves our Sammy. And I'm so very glad.

But I know one thing for certain, absolutely and completely: Solly hasn't forgotten about Sam.

And I know that Sammy would be so glad of it.

Now we have to work on explaining that not even magic could bring our Sammy back.
Posted by Phyllis Sommer at 8:59 PM 7 comments:

1. Because my brother had cancer. It was upsetting and I didn’t get to spend a lot of time with my mom or my dad or my brother. It was hard. I really miss Sammy.

2. To help other kids with cancer. It helps the doctors get new medicines to make their cancer go away.

3. Because I get to do it with a lot of people I know and who I love. That is special because they are my really good friends.

4. I am also doing it with my mom. Last year we both shaved our heads but not together. This time we get to do it together.

5. I am also doing it because my mom said that if I do it, I can dye my hair pink before I shave it. She’s going to dye hers purple. I think we are going to look awesome. If Sammy was here I think he would be crazy amazed.

6. If Sammy was going to be there when we shaved our heads he would be laughing the whole entire
time. I really miss hearing him laugh.

2. Sam is a St Baldrick's Ambassador, and I'm intensely proud that his sweet face is one of those that help the SBF do its great work. (And don't forget that all of new and increased donations to our pages will be matched!)

3. It's been almost a year since the first time I shaved my head and I can honestly and truly say that hair grows back. I am evidence of that! My sweet and sassy Sammy will not. This is an important truth. My bald head helps me to share that lesson.

4. When I floated the idea of shaving again, Yael's enthusiasm for joining me definitely was an inspiration. I love that she had no qualms about going bald for the second time. Last time I held Michael's hand while my head was shaved. This time, I will hold her hand. She's much braver than I am.

5. I must admit, I'm a little excited about our cool hair colors. Sure, it's silly and fun. But it's just one more way to draw attention to the head-shaving and to the St Baldrick's Foundation. I've always wondered what I would look like in purple...

6. Yael's last answer is one of the best ones, so I'm going to borrow it: Sammy would laugh. I, too, miss his laugh. I miss everything about him....

To donate to my head-shaving campaign: https://www.stbaldricks.org/participants/mypage/746574/2015 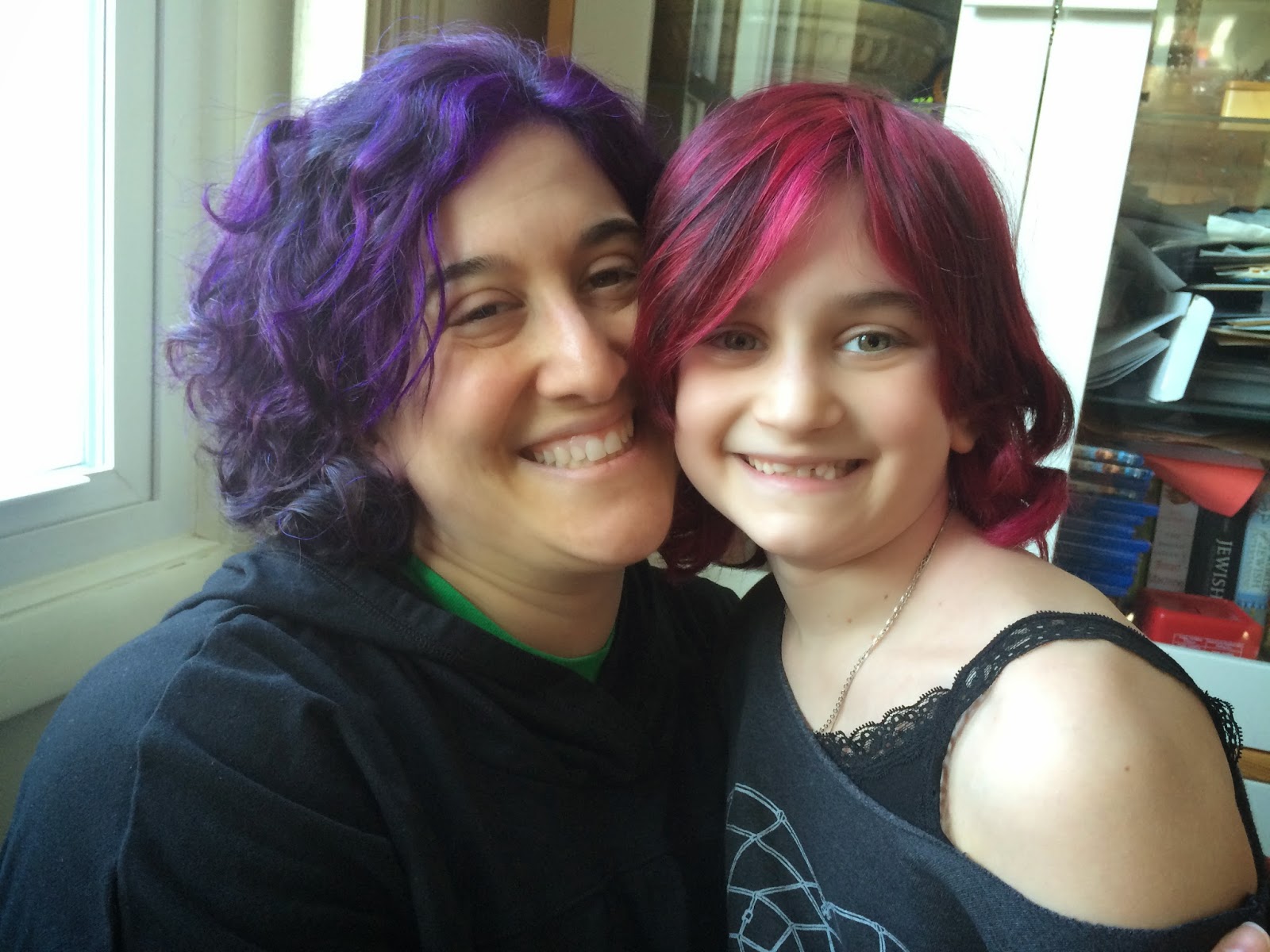 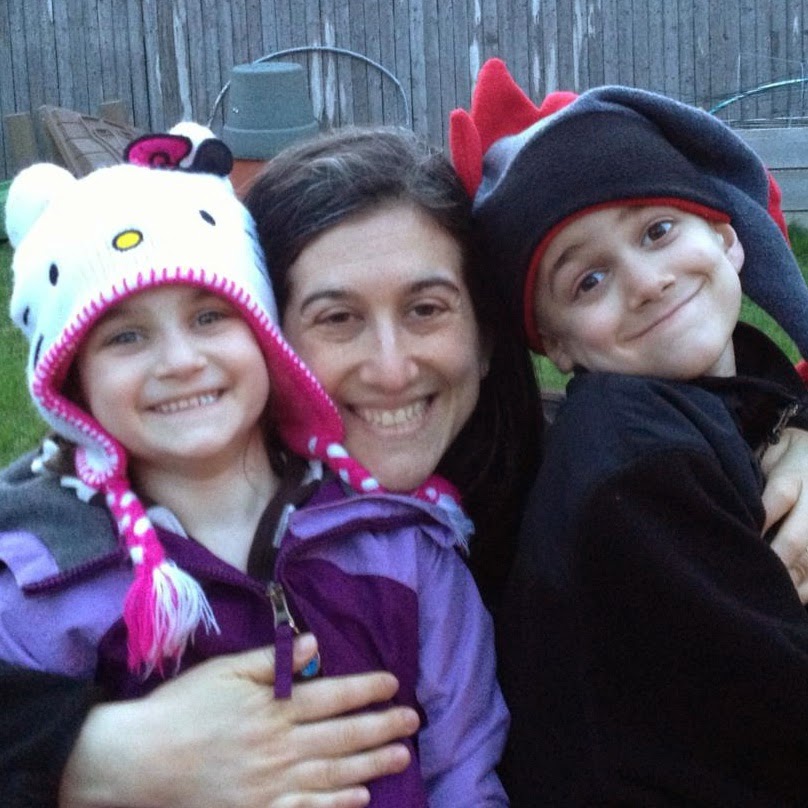 It might just be an algorithm of the Wii system.

This showed up the other day... 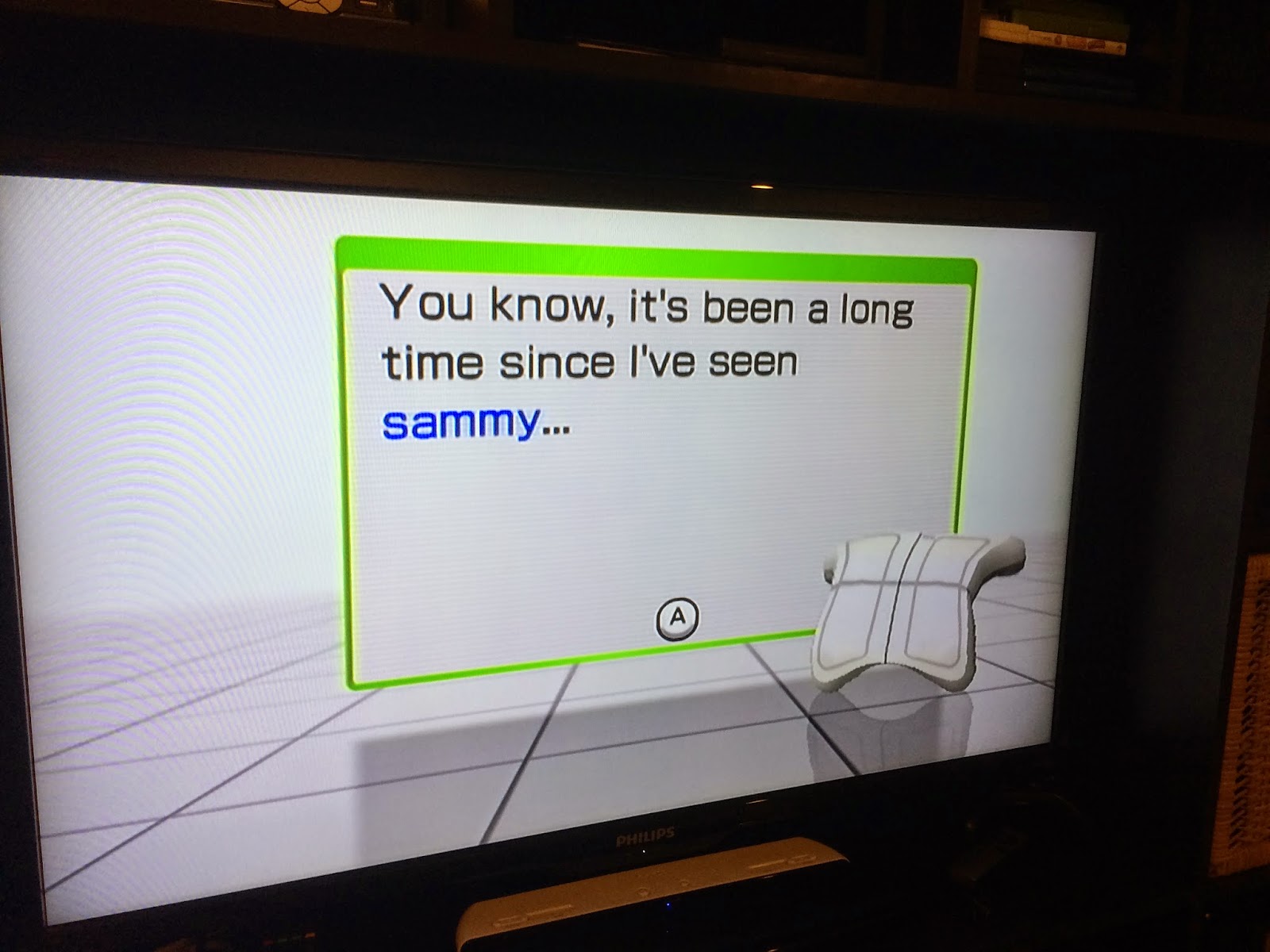 So many days that I have lost count. I had to look it up.
It's been a long time since I've seen him and the days just keep piling up.... 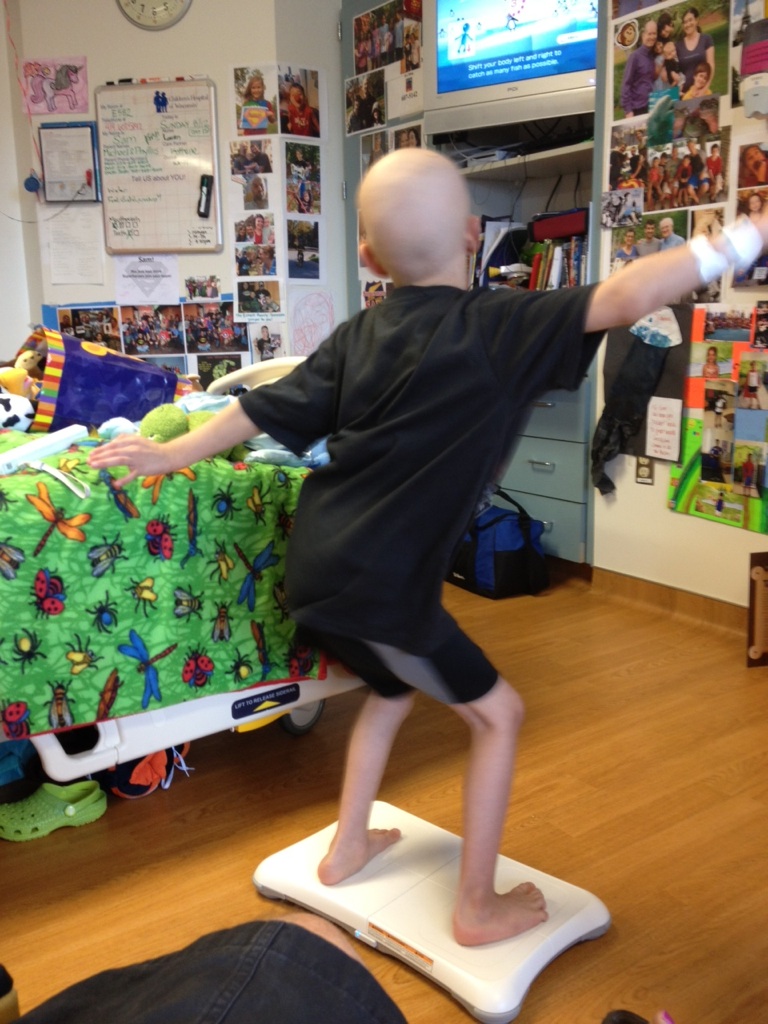 I'm shaving my head again, on March 1st. It's all I have to give....hair grows back. Sammy won't. Help me raise money for very-much-needed research...thank you.

Apparently that Sea Creature that Sammy loved so much is coming out in a new movie.

I saw an ad on television the other night.

I watched hours and hours of SpongeBob in the hospital.
Wait, that's not totally true. I listened to hours and hours. I tried to do something else (read a book, write a blog post, take a nap, anything!) while SpongeBob was on.
And wow, he was on a lot. Sam had the schedule memorized.

There wasn't that much SpongeBob at home. It was more of a hospital thing.

So the ad came on, and I asked Michael, "do you think Sammy would still be into SpongeBob? Or maybe he would be over it." We paused for a few minutes...immersed in our own wondering.

What kids like, what they're into, what they find interesting and thought-provoking and entertaining...these things change so quickly, I've noticed. Sure, my kids settle into interests, but I know so well that what they like in one season may change in the next. They grow, they mature, they change, they're exposed to different and new ideas, they meet a new friend who draws them in a totally different direction. And some things stay the same. Some ideas stick with a kid from the beginning, their personalities continue to ebb and flow around those sticky ideas like water around a rock in a stream.

But Sam....is just frozen. Stuck. The same.
All the things he liked and found interesting and entertaining....those are the things we know about him. We will never know NEW things about him. He will never have a NEW idea or a NEW thought or a NEW interest.

We talk about it. "Sam would have liked this," we say. "Sam would think that was cool." Sometimes we extrapolate. "Well, Sammy liked frogs, so he would probably like this green sweatshirt that you're wearing today." But it's a story we tell.

I wish we knew.

About a year ago, I wrote a similar post.
I keep coming back to this idea, I guess.

Sam is probably watching SpongeBob in ALL of these pictures. Hospital parenting 101: TV distracts, and therefore is a great way to get a reluctant eater to consume calories....I have countless pictures of Sam eating while watching television. 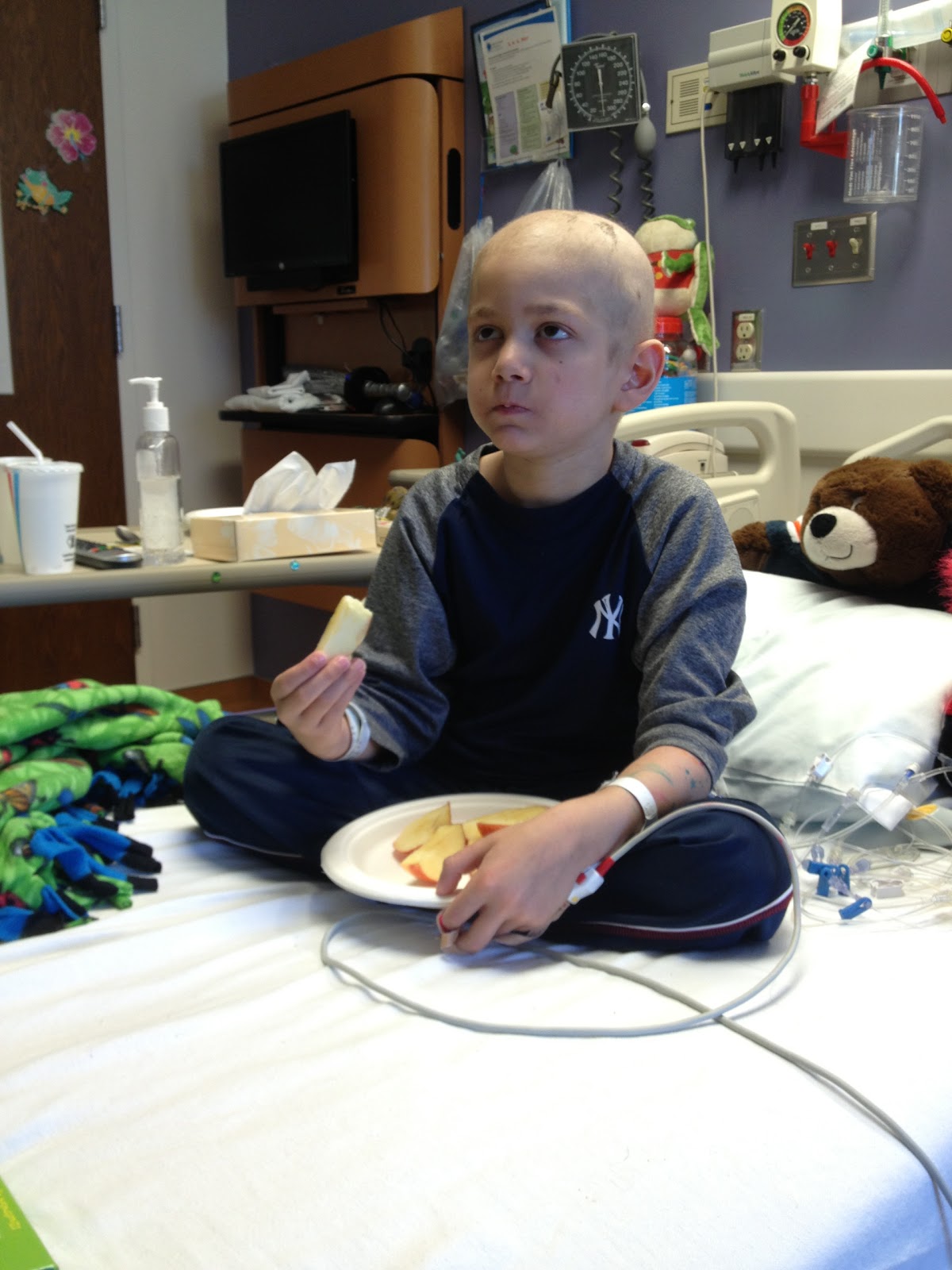 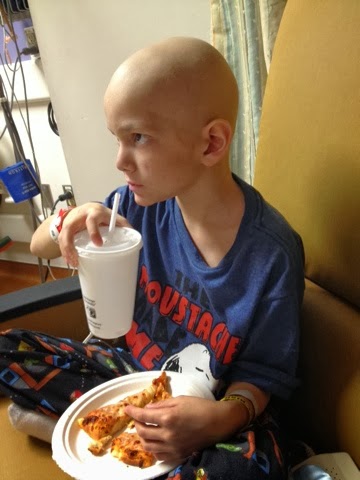 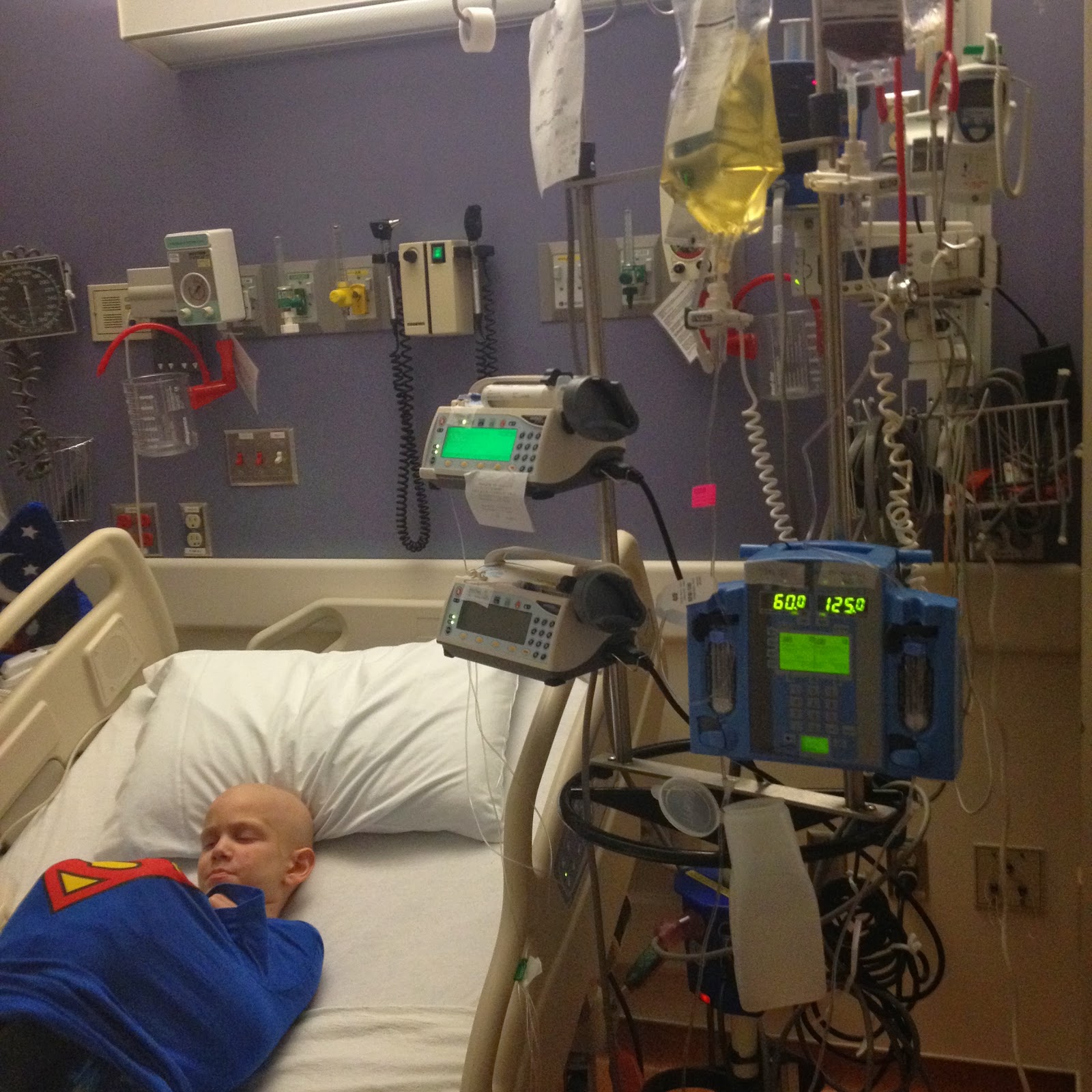 THIS little miss is shaving her head again. All new and increased gifts will be matched, so find a friend that you've never asked...and ask that person to donate. Give other parents the gift of watching SpongeBob for years to come.