Those two numbers are remarkably similar. We had him physically with us just about as long as we haven't had him.

Today is his 16th birthday.

Several of our family members are currently binge-watching The Vampire Diaries (judge away, friends). Vampires are so interesting - they can live for hundreds of years. Of course, the show doesn't spend too much time on the existential questions about what it means to live forever...and yet, some episodes do address that deep question. What does it mean to fall in love and know that you either have to bring that person into immortality with you, or watch them grow old and die? And then there's the coming-back-from-the-dead, which people do with remarkably frequency on the show. A whole story line was devoted to the number of people in a mysterious "other side" that wasn't quite death, and then they all came back. (Even the bad guys.) On the Vampire Diaries, dead is not dead. It feels...temporary. And so each time someone dies, the characters talk about "bringing them back" - and they really mean it. But coming back from the dead is never without consequences. Something is always taken or given in return. Something is always not quite right. Death is still a supreme and terrible force, even in a story where it can be magically defeated.

So many questions swirl in my mind, especially in the evenings when we're hopped up on a few episodes.

What would I have given to bring him back, even for a moment?
What would I do if life-eternal had been granted?
What would he be like if magic had healed him, brought him back, given us the happy ending we wanted?

For several years, we tried to do "what Sammy would have wanted" for his birthday. We watched his favorite movie and we ate his favorite foods.

But last year, and this year, we have tried to think about which of the current favorites that WE have as a family - which of THOSE experiences that we're currently living - which ones would speak to him. It's really hard to guess. To imagine. To magically place him into our world for a moment, even just a silly moment like "what should we have for dinner?"

2,886 days is a long time to be apart. He's unchanged. Frozen in time, as I said last year. We are not immortal, but we continue to grow and change and make new stories without him. And we miss him. All the time.

To make a donation in honor of Sammy's birthday, click here or here. 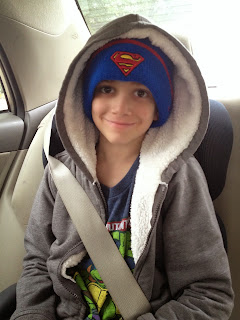