Ooh! Ooh! A wishing flower!
One for Yael and one for me.

What are you guys going to wish for?

For Sammy to come back. 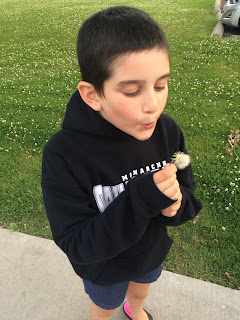 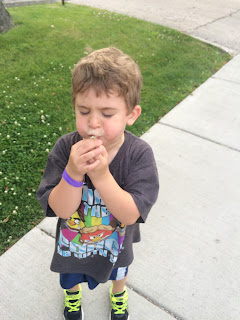 Remember, we talk about Sam all the time.

And every so often, when it feels like we've gone several days without talking about Sam, Solly will pipe up with, "I think I'm forgetting Sammy."

I think he means, "hey, folks, you haven't talked about him in the last day or so," but since he's four and his options are limited, that's what he comes up with.

At least that's what I tell myself.

Each day, he feels farther away. His peers get that much taller and more grown-up. Another summer is midway through and he's not amongst the campers.

Today, Solly engaged in two of Sammy's favorite camp activities: he rode horses and he climbed the Alpine Tower. And he did it all wearing a shirt that said "Sam." It wasn't on purpose when he got dressed this morning, but it felt just right to see him sitting up there on a horse, wearing one of Sammy's shirts.

We're not forgetting him anytime soon...or ever. 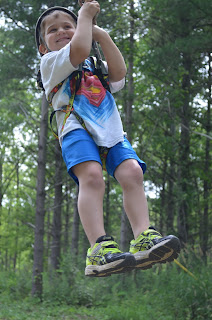