A nice quiet day on the HOT Unit. Still no counts, some more not-quite-normal-temps-but-not-quite-worrisome-fevers, a few more hamburgers eaten, and a generally upbeat day for Mr. Sam and his crew of loyal attendants. Or is that royal? Same idea, right?

There was schoolwork and some art projects... 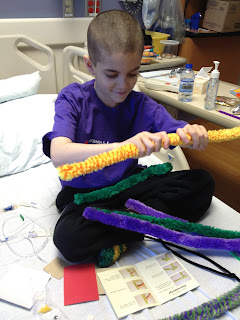 A little FaceTime with friends... 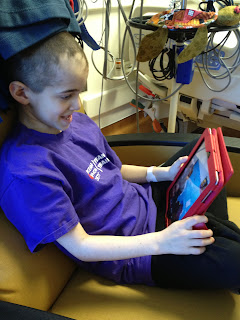 At some point today, we noticed that Sam's hair was falling out. Sam and Uncle Josh had shaved off most of it, but now we are at the falling-out stage. So Sam did a lot of this (below) trying to get the hair out. Mostly because it was fun to watch the little flecks of hair all over the white bedsheet! 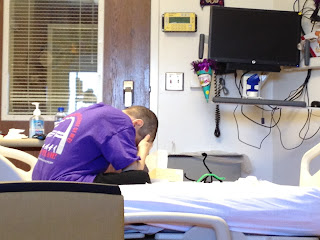 We took a little expedition downstairs today for the briefest time (after 5pm, when the hospital is emptier, just a quick jaunt) to catch just a breath of the nice springy fresh air. 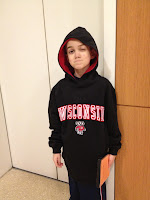 But then it was back upstairs for what ended up being quite an adventure: hair removal! We had tried a bath (no help) and just plain head-rubbing, but these didn't get a lot of hair off the head. And frankly, those little hairs were getting annoying. So I suggested duct tape. At first Sam thought I was crazy! But then I showed him how (a la a lint remover) and he was intrigued enough to try....three rolls of duct tape later and his head is much more....bald. 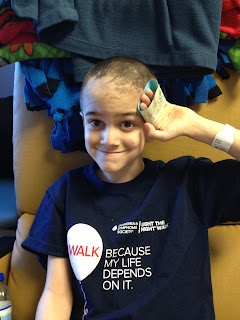 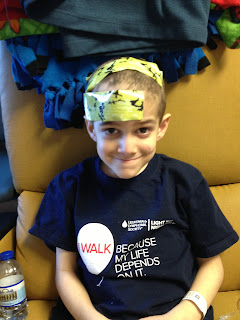 (the wifi was giving me trouble so I hope this video works.
Otherwise go to: http://youtu.be/VFda-3vjuHM)


That occupied our time for a while until we finished our laps for the night. Sam decided that 30 was today's magic number, so we did it in a few batches, but with the bulk of the laps before bed! 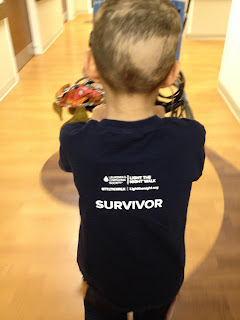 I love this picture. His almost-bald head and that one word: "survivor." Yes, he is. And not just because we plan for him to beat this thing, but because he is embodying the ideal of surviving -- to carry on, despite hardship or trauma. In this case, to be silly and fun-loving even in the midst of the ridiculousness of hair loss from poisonous chemicals that hurt before they help....but oh, they do help.