Pleasant Surprises for Everyone!

The day started late and grey, but gorgeous. Boppem Sockems in repose on the windowsill, the change of the leaves bright and beautiful as far as the eye could see, all the way to the city's skyline. 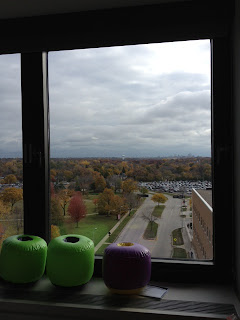 A little after nine Sam awoke with his award winning smile ready to tackle another day upon his healing path. We were excited to have Nurse E taking care of us all day. He'd stop in every hour or so and check in on us, sit for a while and talk video games and food. It was great to see him and catch up. 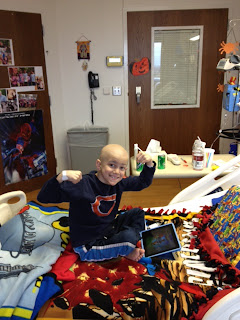 With some food and water in his belly, Sam's Hospital teacher came in and showed him some amazing things on her iPad. Toontastic:Free allows you to create and dialogue an animated cartoon with a soundtrack of your choice. It is an amazing app and occupied Sam's mind for all thirty minutes of the lesson (sorry, no pictures. Sometimes I forget I have a job as photographer and stand there as a bystander marveling at Sam's creativity and genius). We said thank you and goodbye and quickly downloaded the app for ourselves.

After doing some of Sam's other homework we were pleasantly surprised by a knock on our door. Cousin Ricky arrived with his flute to play for Sam, teach him some music and just jam together making cool sounds. 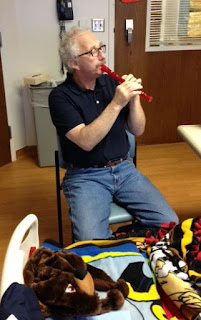 Sam even impressed Ricky with his ability to play his recorder with his feet (Challenge Accepted!). 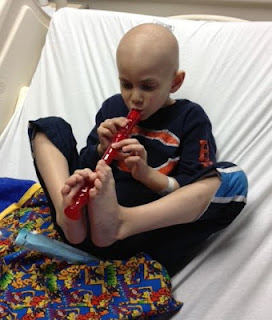 Bubbe came during the jam session and delivered a special gift she eventually chased down after a few stops. Sam had requested a stylus to use for his iPad artwork in Sketchbook Pro. Sam did some amazing work creating a picture today with his new stylus. Well worth the price of the stylus and the exertion to get it. 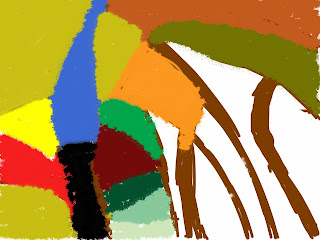 Grandma arrived mid afternoon for a tutorial in the fine art of breading dragons. Dragonvale was the language that prevailed and a hush filled the room as the two conspirators plotted their designs of the perfect Dragon park and the precise methods for breading Seasonal and Ghost dragons. Of course a fist full of iTunes Bucks (a wonderful gift from friends) that arrived during Music Therapy didn't hurt. 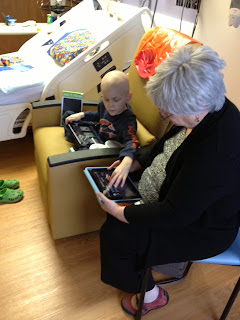 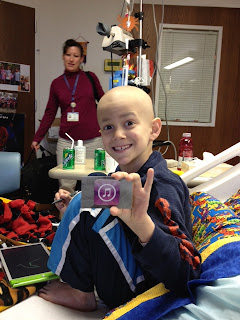 All in all it was a very musical day. During Music Therapy, Miss N and Sam did some amazing work creating a riff called the Twelve Days of Halloween. The arrival of an iTunes card seemed only fitting as Miss N and I talked 80s music and trivia before she and Sam got down to the hard work. Sam and Miss M thought long and hard about what monsters to include in the song. Choosing twelve monsters was daunting, but they worked hard at the task and had an amazing time creating the song together.

Towards evening things slowed down for a bit, we did a little more homework and watched some television. Sam had me reading the end of Harry Potter and the Prisoner of Azkaban fast and furiously all day. He couldn't wait to finish, although he wants to wait until I return to see the movie. Every break we had today was filled with going from 86% on the kindle all the way to 100%.

At one point Nurse E and Sam were talking about the video game, Golden Eye, when we decided to adjourn to the TV lounge so that Sam could show Nurse E how good he was at stealth missions in the game. Nurse E took a turn too. While we played one of our new friends, a two year old in his third round fighting Sam's same villain, toddled around our feet, smiling at us and working hard to catch our attention away from the screen. As adept as Solly in swiping tech, every now and then we would see him walking around with his momma's phone in his hand, dialing some friend or the other by their picture.

We returned to our room, got ready for bed, finished Harry Potter 3, and put in the French animated film, A Cat in Paris, that our friends left for us yesterday. It was cute and beautifully animated. It was short and just what we needed to settle in to the end of the day. We finished the film, brushed our teeth, sang Shema and settled in for a good night's rest.

Today was exhausting and fun all at the same time. Sam pushed limits yet always kept his smile and positive attitude. He ate, he drank, he played and sang. He took what he wanted from the day and made the best of it. Thank you to everyone who made this day exceptional and to all the prayers that have made this healing process possible. We've all worked so hard and now the goal is in sight. Watching our toddler friend, I couldn't imagine not being able to speak and needing my parents to figure out something was so wrong. And yet he toddled at our feet with a big grin on his face as if being in the middle of his third round was the most normal thing in the world. From children we must learn that we can conquer anything. From babes we must learn to smile and make the best of it no matter what because nothing else matters. It took everything not to scoop him up and cry with laughter and pain in my own fears and concerns for all of us. It just was. His mom and I talked video games and Halo while Sam played. We talked about apps a two year old might like on her old iPhone since clearly this digital generation is not to be deprived. And we sat in our own thoughts as our children played like children.

I am blessed. I feel blessed. We feel all the love and prayers keeping us afloat.
My love is infinite and my gratitude knows no bounds. Peace be with you all.
Posted by Unknown at 10:53 PM