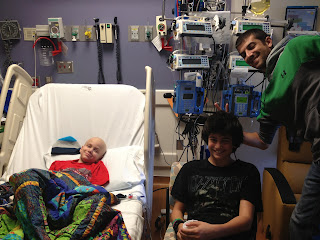 So things are just....going.
Sam is feeling pretty well most of the time.
Still fighting nausea.
Still worrying about pill-taking and eating.
Still doing laps and mouthwashes and all the other hospital fun.

And that's about it.

So I turned to my trusty online community and asked what they wanted to read about on today's blog, and so here are some of those answers....(aka Crowd-Sourcing)

1. Sukkot -- I'm sad to say that we aren't building our sukkah this year, obviously. But that doesn't mean that we won't have the joy of celebrating one of my favorite holidays. Of course, the kids will have the opportunity to dwell in the sukkah at their respective schools, and with some hope, perhaps Sam will too. In some ways, living in the hospital and at Ronald McDonald House is the ultimate in "temporary dwellings" and so perhaps we're constantly in a sukkah? I'm sure there's a nice sermon in this somewhere.

2. The Other Three -- Yes, the other three are doing quite well. I have now been to two back-to-school nights and learned all about first and sixth grades. There were mealworms on Yael's desk and this morning I got an update that one of them had shed its skin. I know that the big kids see this as a good place to be, and to them it is "just school," which is great. I've spent some time with both of them talking about how it is okay to miss our schools at home and it is also okay to enjoy the school they are in -- it's not disloyal to either and it's alright to like both. So I think that they do. They alternate between talking about new friends and also asking to go back and see old friends. Solly is also loving school. He was excited to show off his new shoes to his friends today. I think his favorite part of school might be the other kids his own size. 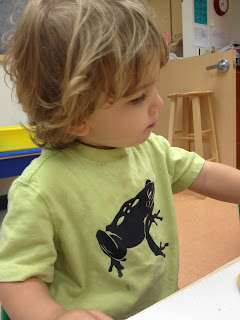 3. Laundry and Cooking -- Yes, we do both of these things over at the Ronald McDonald House, and it's so nice to have a space to do both. I wish that I could cook things that Sam would eat, but I know that time will come. I have to say that one perk of RonMac is that there are, just like in a dorm, a row of four washing machines. At home I only have one, so this is actually a little bit nice to be able to do multiple loads all at the same time. (And as I say all the time -- I'd give this perk up in a heartbeat.) We tend not to cook very much, though, since there are dinners almost every night. Sometimes the food isn't exactly to our liking but then we just heat something up in the microwave. But our accommodations are quite nice in that regard. Maybe I'll bake a batch of cookies or banana bread soon....

4. Educational ideologies -- (I am just going down the Facebook list, here, people.) Actually, I'm still happy that I'm able to work on the class on Educational Ideologies that I'm taking online. It's sometimes hard to focus on such academic material while sitting in the hospital or late at night at RonMac but it's actually nice to have something completely different to think about. Currently, I'm learning about the Sudbury Valley School, if you're interested.

5. What Sam Thinks -- I asked him what I should write tonight and he told me to take the night off. I told him that I would go and write "Sam says to take the night off" and he said, "but then you ARE blogging by writing that!" He agreed that today was mostly boring and that he played monopoly with Uncle Harry and did school and took a nap and that was about it.

6. Book and Movie Recommendations -- I know that Sam and Michael have watched some movies together but there haven't been many on my nights, for whatever reason. We have finished all the books in the Dragon in My Sock Drawer series (the next one comes out next week!) and we're currently reading George's Marvelous Medicine by Roald Dahl (thanks, Julie!). He's reading a different book with Michael. Sam likes to keep things orderly that way. Also, we watch a lot of SpongeBob. My favorite.

7. Pumpkins -- Did you know that our hometown of Highwood has held the title of Most Lit Jack O'Lanterns In One Place (or something like that)? Our annual Pumpkin Fest is very cool. Last year, there was a Pumpkin Run, and it benefited the Leukemia Research Foundation. This year, the Pumpkin Run will benefit St. Baldricks Foundation, which is one of the largest contributors to research for pediatric cancers. There's also going to be a St Baldricks shaving event!

Okay, I think I covered all the bases that you guys suggested....and that's what's going on up here on 5East today! Any other questions?